The word ‘storienteer’, is a portmanteau of “story” and “orienteer”. It refers to either a person (noun) or a group of people engaged in the act (verb) of orienting to – that is, finding their way with – design stories. Storienteering is supported by a suite of bespoke/custom resources (below) that enable designers to spin, craft and share strategic stories. Storienteering approaches and resources are underpinned by design research and narrative theory (see: Story Research).

Narrative resources can be categorised according to roles attributed to use.
Content Exemplars are resources that inform narrative composition through the provision of story content.
Discourse Prompts invigorate discussion and prompt narrative expression.
Narrative Fugitives are resources that emerge in practice to fulfil unanticipated needs.

Content Exemplars support narrative composition through the provision of prompts that deal with story content. Many Content Exemplars take the form of card sets. Card sets are well suited to activities that involve the creation, sorting and configuring of lists, categories and disparate forms of information. Apart from their usefulness, cards are easy to create and edit. Since these card sets underpin the creation of stories, they are broadly referred to as Story Cards. Story Cards include;

Actor Cards
Actor Cards are used to help designers spin fictional scenarios or stories by providing a cast of actors.

Event Cards
Even Cards are used to plot stories as a sequence of events. They're typically used
in conjunction with Dial-a-Plot and, like Plot Themes, are often assigned at random.

Content Cards
The role played by Content Cards in story work differs from that played by other cards,
which explains their distinct shape, colour and inscriptions. While the primary role of Story cards
– such as Event cards and Location cards – is directive in that they give information intended
to guide activities, the primary role of Content Cards is acquisitive, in that they hold
information that may otherwise be overlooked or lost. Used almost exclusively with Visual Plot-line,
their resemblance to Post-it Notes is not accidental. Blank space is used to make notes. 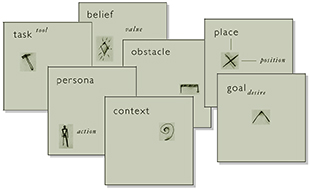 Bespoke (custom) Content Cards
This set of bespoke Content Cards was designed to provide supportive prompts for a design story
about future bereavement. Note that each card has a distinct shape and colour to aid recognition.

Location Cards
Locations have considerable impact on stories. Not only do they shape events
and set the scene for happenings, but they can be meaningful for particular actors.
Location Cards very simply describe where events in a story take place.

Trait Cards
For designers involved in building fictional characters into their scenarios or stories
Trait Cards provide some envigorative prompts.

Post-It People
In storytelling activities that concern themselves with plot-line development or
visualisation of stories, Post-it People provide designers with simple figurative
prompts, which act as 'placeholders' or mnemonic devices to represent key actors.
These laser-cut Post-it Notes are often used in conjunction with Content cards
during development of Visual Plot-lines. 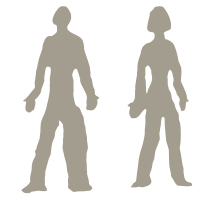 Proverb Randomizer
Sometimes all a design story needs to make it more meaningful and memorable is a good plot-line,
something that helps the audience understand what motivates actors, underpins actions and drives
events toward resolution. Here, proverbs can be a handy narrative device, for they can help designers
to invigorate the plot-line of their story. Proverbs are commonly held truths that are often expressed
as metaphors. Metaphors operate on a principle of comparison. For example, 'a stitch in time saves nine’
is like missing an opportunity to take care of something that will get out of hand if left unchecked.

Proverb Randomizer is a game-like activity that comprises a chequered game board, a pair of three-sided
dice and a set of cards. The board is divided into four quadrants, each of which features the work of a
famous artist. Play commences by choosing a theme or artist and throwing the three-sided dice. Numbers
on the dice give the coordinates of a proverb in the chosen quadrant. 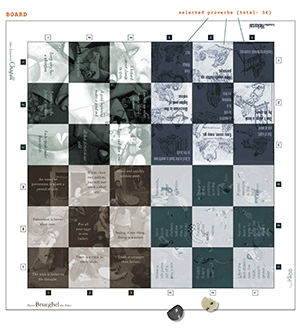 Event map
Event Map is adapted from a model described by Chatman (1980:54). The model helps designers
plan and manage strings of events that determine the plot-line of a story. There are two types
of events to consider; kernel events (a) have a significant impact on the plot, whereas
Satellite events (c) have less impact and consequently can be changed more readily. Events
are clustered into Blocks (b).

Dial-a-Plot rectifies this by supporting plot development during story authorship.
The resource is underpinned by ground-breaking narratological work conducted by Vladimir Propp,
a Russian Formalist who, after studying over one thousand Russian folktales, discovered that there
were no more than thirty-one common themes, or plot functions (hereafter referred to as 'Plot Themes').
The three segments of the dial represent the ‘three-act structure’ – a concept used in theatre
and narrative construction that divides the plot-line of a story into a ‘set-up’ (beginning),
‘confrontation’ (middle) and ‘resolution’ (end). Eighteen numbered Plot Themes are arranged
around the dial; six in each segment.
Dice are rolled and participants draw Plot Themes. Then, chance and randomness take over as
designers are prompted to use their imagination, think narratively (Bruner, 1985), and draw on the
tendency of the prepared mind to make sense of disparate bits of information. 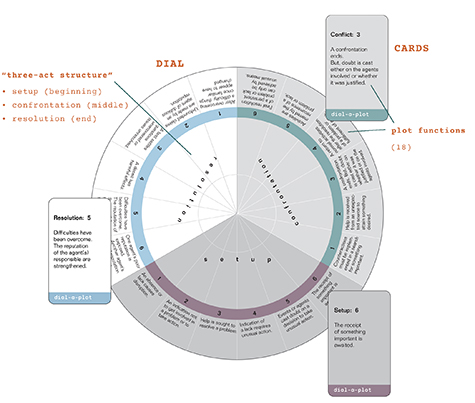 StoryFrame
Not all design story work concerns itself with the creation of new scenarios or stories. Often story work
involves editing, adapting or building upon existing stories that are either being developed and refined,
transposed from one medium or mode of language to another, or critically analysed and deconstructed.
In these situations a set of Plot Themes arranged in a table or frame' provide a simple yet flexible
solution. Below is an example of a StoryFrame with notes taken in a story-spinning activity. 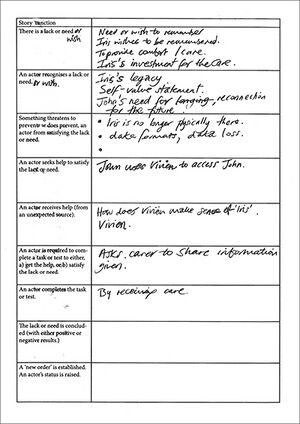 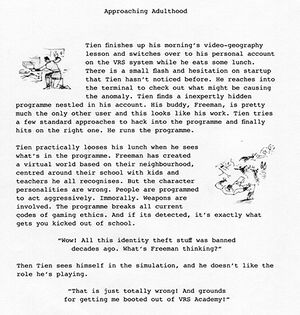 Narrative Fugitives appear to act in diverse ways across the story–discourse divide.

Visual Plot-line
Visual Plot-line enables rapid capture of essential elements of narrative, such as actants, events, actions
and happenings. Using hand-drawn graphics, annotations, Content cards and Post-it People, stories are
sketched-out either on whiteboards or large sheets of paper. Once expressed, Visual Plot-lines provide a
framework for creating narrative (re)presentations in a variety of media, such as refined prose, storyboards
or video enactments.
The aim of visually describing the plot-line of a story is to turn what is often expressed in rough, general
and abstract terms typically open to wide interpretation into a form that demands concrete particulars,
interpretations of which can be openly discussed.

"20-Questions"
Named after the by now quite ancient television game show, "20 Questions" is a list of questions
composed by designers to initiate desired conversations that not only probe for answers but also
raise or touch on issues that resonate for design. Here are some example questions:

1. What is the formal, working relationship of the communities in question?
2. How are the communities distinct, what defines their differences?
3. What are the routines that relate most closely to the boundary issue?
4. How do these fit into the rest of the workflow?

Narrative Blueprint
Narrative Blueprint is a kind of affinity diagram. It lays out and brings into focus key
factors in play when designers are engaged in coming to grips with the settings or contexts of a
problem or challenge. Centred on a timeline of narrative events, the arrangement of Post-it Notes
provides the means to field, discuss and assess design concepts and scenario permutations. 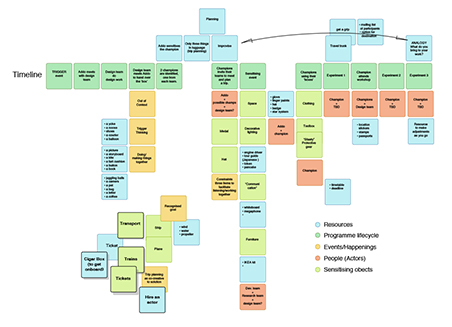 Aspect Map
Aspect Maps are a type of ‘cluster map’ that give design teams a way to spatially map
multiple aspects of subjects of inquiry. They facilitate information gathering and organisation
(grouping/clustering) as well as affinity-based ideation. 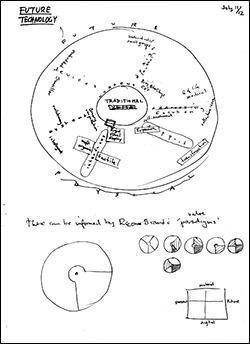